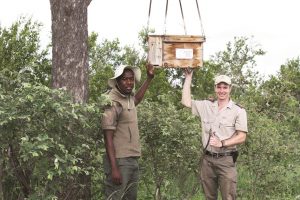 Elephants and large trees, such as knob thorn and marula, are all characteristic parts of the African bush. In a natural world there should be no conflict, but where elephants continually encounter the same large trees due to the fencing off of reserves, or an abundance of waterholes, elephant impact on them increases. This is why Elephants Alive have been researching methods for protecting particular large trees since 2004.

Elephants don’t like bees. In spite of their thick skins, they still have three sensitive points: their eyes, ears, and trunk. The moisture in the trunk attracts the bees, which causes discomfort to the elephant. In late 2015 a novel research project was embarked on by Elephants Alive in conjunction with Jejane Private Nature Reserve, which focuses on the use of beehives to keep the elephants at bay. Robin Cook and Ronny Makukule, under the guidance of Elephants Alive’s Director and Co-Founder Dr Michelle Henley, run a research site on Jejane Private Nature Reserve, part of the Greater Kruger National Park, where they are monitoring 150 trees for the fifth year running.

Jejane has a very high marula density, as the reserve had no elephants for over 100 years. When the fences came down, it was a veritable candy store for the elephants, with the big males leading the foray. There was a lot of impact at first, making the reserve an ideal study site for Elephants Alive to test the beehive mitigation method. Elephants Alive are very grateful to the management and owners of Jejane for giving them access to their property for research purposes.

So far, the results from using bees to protect the trees have been very encouraging. Fifty large marula trees were hung with one active hive and one dummy (to protect both sides of the tree), and to monitor the effectiveness, fifty trees were protected with the more traditional method of wire netting and fifty left as controls. Results after four years show that only 10% of the “bee trees” had been touched by elephants, in contrast to 54% of the wire netted trees and 84% of the controls.

The drought years brought interesting new information about bees and elephants. The bees were taken back to camp to give them a chance to survive, and the researchers consequently gained one year’s data on the protective effect of empty hives. During that year, only one tree with a beehive had been impacted, and only with a single broken branch.

At the end of the drought wild swarms had moved in, and the original bees stayed in camp for honey production. Anybody using beehives to keep off elephants will have the bonus of honey as an income source. The first year’s yield for Elephants Alive was 70 litres of honey, which is sold at the Hoedspruit Farmers’ Market and also to lodges – with a very positive conservation story as a strong selling point.

Even though inactive hives kept the elephants away during the drought, they are highly intelligent animals and, sooner or later, there would be a smart Alec who would work it out. On the day K2C News interviewed Elephants Alive, Robin and Ronny were preparing to bring a new active hive to replace a dummy broken by a bull elephant, having called its bluff. When he next visits, he will not be so cocky!